10 years COE CSW –
a decade of competence and success

Kiel.
The NATO Centre of Excellence for Operations in Confined and Shallow Waters (COE CSW) celebrated its 10th anniversary on the 15th of November, 2018 at the Schleswig-Holstein State Hall in Kiel, Germany. In the presence of high-ranking representatives from politics, academia, science and NATO, the Minister of the Interior for the Land Schleswig-Holstein, Mr Hans-Joachim Grote (63), honoured the NATO think-and-do-tank with the awarding of a campaign streamer – one of the highest distinctions given by a state government. Grote represented the Prime Minister Daniel Günther, who could not attend the ceremony as planned, but who took the occasion for drawing a positive summary of the past ten years of the COE CSW.
"The campaign streamer expresses Schleswig-Holstein’s esteem for soldiers from ten nations. The NATO Competence Centre is a lively element of the social environment and has a positive influence on life in Schleswig-Holstein," said Günther. 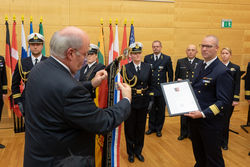 A campaign streamer or commemorative band is a decorated ribbon, usually inscribed with lettering, which is attached to the headpiece of a flag. Many armies award streamers as a special honour. In Germany they are the most esteemed award that a government can bestow upon a military organisation. In modern times, this honour represents the close relationship between a federal state and the troops stationed within that state.

The dignified evening ceremony was musically accompanied by a sextet of the "Lübecker Schule der Gemeinnützigkeit". 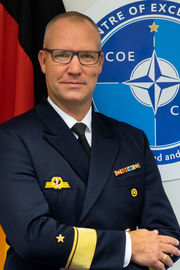 The director of the COE CSW and host of the event, Rear Admiral Christian Bock (49), underlined the increasing relevance of the COE CSW’s work:
"The littorals are very important because the majority of the population lives near the coasts and in coastal areas. We therefore expect future deployment scenarios and conflicts to focus on the so-called ‘focal point coastal proximity’. Our COE CSW has earned a good reputation in this area, which fills me with special pride. For the next decade we have set ourselves the goal of accepting new challenges, developing ideas, leaving worn-out tracks and constantly working on ourselves and the further development of NATO and thus also the German Navy. Over the past few years, we have repeatedly and flexibly adapted to new security-related developments, while remaining true to our basic ideals as a NATO service provider and think-and-do-tank. I am now looking forward to the challenges of the coming decade." 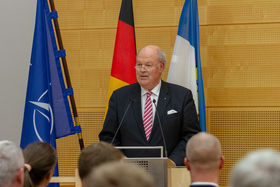 Interior Minister Grote emphasized the importance of the Centre for the region and for NATO:
"Today, we focus on the experts from ten nations who have long since become part of the social fabric in our region and have a positive influence on life, as well as on the organisation for which they stand here for. The Alliance is and remains the cornerstone of our security, also in Germany. The award of the campaign streamer by our state government symbolizes the appreciation of the state of Schleswig-Holstein for the soldiers and their work here in our federal state. At the same time, it is an expression of solidarity with their comrades from a total of 29 states, who together contribute to peace and security on a daily basis." 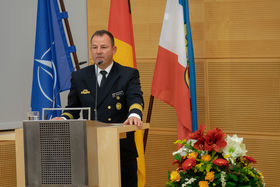 The chairman of the COE CSW Steering Committee, Rear Admiral Reineke, represented the host nation Germany. He took the chance to praise the good cause of the COE idea:
"What started ten years ago with a small group of just three nations has developed over the years to an internationally recognized institution which serves of a role model of international cooperation and professionalism. It is deeply embedded in the maritime community and NATO. This would not be possible without the enduring participation of nations which have brought in and contributed with their expertise and support,” Reineke said and added:
"I can say today without exaggeration that Germany is very proud of what we have achieved together and where our COE CSW stands today. You might recall that Germany has been a strong and active supporter of the COE idea in NATO from the very beginning."

He concluded by saying: "We can state here today that since its foundation the COE CSW has delivered outstanding results and substantial added value in the area of Capability- and Doctrine- Development for the benefit of NATO and its Allies. This is in particular true for our Baltic Region. To sum it up: I can convey that Germany is proud of the COE CSW"

Background on the COE CSW:

The German Navy possesses unique abilities and significant experience when deployed in coastal waters. The Kiel-based Flotilla 1 (Einsatzflottille 1), under the leadership of Rear-Admiral Christian Bock, is at the centre of these capabilities. Because of these close ties, the Competence Centre for Operations in Confined and Shallow Waters shares a building on the Kiel base with the flotilla staff. RADM Bock is also the Director of COE CSW. This Centre of Excellence operates as a think and do tank for NATO. Its mission is to develop new operational approaches, review existing concepts and adapt them to the changing littoral environment. The coastal sea experts work within a robust international network of armed forces, science, industry and research. Together they provide ideas and inputs for technologies and systems – to include unmanned mine warfare systems, ASW in shallow waters and for the protection of ships in port. The Competence Centre organises numerous international conferences on maritime safety and has thus gained a high reputation within the community. The COE CSW cooperates with the Munich Security Conference on maritime security at the highest national and international level and the World Maritime University in Malmö (Sweden) to improve the understanding of civil-military security.

There are 25 such NATO competence centres across the Alliance, three of which deal with maritime issues. The COE CSW in Kiel employs 42 soldiers and civilian employees from ten nations, including officers from Italy, Poland, the Netherlands, Denmark, Turkey, Greece, Finland, Lithuania and the USA. Other states (e.g. Estonia) are heading for early membership.