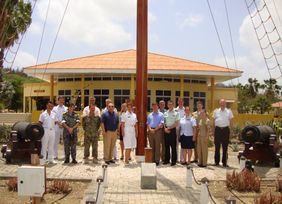 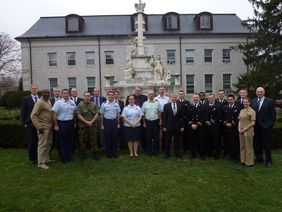 The COE CSW is happy and beyond proud to announce the successful completion of not one, but two Legal Workshops!

The Search and Rescue/Assistance at Sea Legal Workshop was held in Washington D.C. and Annapolis, Maryland, USA from the 6th to the 10th of April 2015.  The COE CSW, in cooperation with U.S. Coast Guard, was host to more than 25 participants including individuals from Canada, The Netherlands, Germany, Austria, Denmark, Great Britain, United States, and Nigeria.  Our eclectic group of participants ranged from individuals with as little as no practical experience (Naval Academy Students) to those with more than 30 years on the job.  This unique mix provided for thought provoking discussions and heated debates.  Shortfalls were noted in various documents, illustrating the need and perfect timing of our workshop.

The Countering Illicit Activities as Sea- A New Perspective for Navies Legal Workshop was held in Willemstad, Curacao, from the 5th to the 8th of May 2015.  The COE CSW, in cooperation with Royal Netherlands Navy, hosted 16 participants from Great Britain, Canada, The Netherlands, France, Finland, Australia, Germany, and the United States.  Participants were from such agencies as; UNODC, Combined Maritime Forces, EU NAVFOR ATALANTA, MARCOM, USSOUTHCOM, and the US Naval War College.  Topics such as “Genuine Link”, “Flags of Convenience”, and issues on the ever expanding reach of the European Convention on Human Rights created stimulating discussions.  Gaps in policy, confusing verbiage, and national opinion all lead to differing interpretations that we have to be aware of in order to prevent criminals from ruling the High Seas.  Participants were able to see the procedure for developing the San José Treaty and many found it would be useful in other areas of the world where similar work is being done, not only to counter illicit activities, but also increase international cooperation, reduce repeat work, and build coast guards from the ground up.

The COE CSW would like to thank all of our participants for their efforts and time.  A special thanks to our co-hosting partners for all their hard work and dedication, without which these workshops would not have been nearly as successful:  The U.S. Global Maritime Operational Threat Response Coordination Center and the Royal Netherlands Navy/ Dutch Caribbean Coastguard.

If you missed out, please join us next time! We would love to have you.