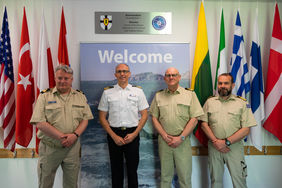 As the sea ice is melting, the remote areas of the Arctic are gaining the attention of the international community. Apart from the scientific questions on climate change, the vast undiscovered resources, new shipping lanes between Asia, Europe and North America, and the independence movement in Greenland have the potential to shape the geopolitical chessboard of the 21st century.

The North Atlantic is back on the agenda, and as a consequence Iceland, formerly referred to as "the unsinkable aircraft carrier", increasingly regains strategic and geopolitical interest.

In recent years, COE CSW has deepened its relations with civil and governmental and, in particular, with the naval authorities in Iceland. Therefore it was with great pleasure that the COE CSW could welcome the heads of the Icelandic Coast Guard, Director General Rear Admiral Georg Larusson, ChiefOps, Commodore Asgrimur Asgrimsson, and Captain Audunn Kristinsson to our COE CSW a second time.

During the meeting with the Executive Director of the COE CSW, Captain Eike Wetters invited the guests to consider possible ways of cooperation between the Iceland Coast Guard and the “NATO Think Tank for Operations in Confined and Shallow Waters” in Kiel. Subject matter experts from the Iceland Coast Guard are already extremely valuable contributors in various areas, not only regarding “Maritime Operations under Arctic Conditions”. The COE CSW with its multinational and cross-departmental network is looking forward to foster the cooperation with our partners in Iceland.