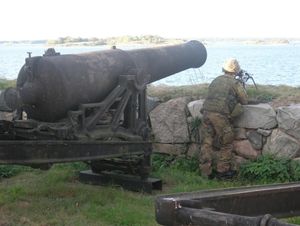 The North Atlantic Council (NAC) decided in 2004 to initiate a programme on Defence Against Terrorism (DAT). Along with this endeavour Force Protection (FP) came into the focus of attention by the Alliance. The COE CSW got involved in the FP challenge already in 2008 and has since continued to support the work on the subject. In parallel, the COE CSW is also driving forward the capability development in the specific field of Harbour Protection (HP).

For validating our products, the COE CSW conducts FP and HP trials especially during the Exercise NORTHERN COASTS (NOCO), for instance trials on FP at Mine Counter Measure Operations. In the meantime, based on the findings and results, a considerable number of Change Proposals (CP) for the NATO Allied Tactical Publication (ATP) Maritime FP have been developed and already implemented in this NATO publication.

Furthermore, the COE CSW supports FP developments within the Alliance by comprehensive reviews of the main FP publications and by active participation in several maritime FP panels and groups. Especially our participation in the NATO Specialist Team on Harbour Protection (STHP) under the lead of Portugal was very effective and resulted in the development of a new ATP HP-Doctrine. Based on this publication, some NATO nations are now building up an HP capability.

In 2014, the COE CSW joined the leading NATO Force Protection Working Group as a permanent member. As such, we are taking care – in close cooperation  with the Headquarters Allied Maritime Command (MARCOM) – that maritime FP aspects are adequately reflected in respective Joint NATO publications.

In support of MARCOM the COE CSW is also giving lectures on the Maritime View of FP at the NATO School Oberammergau (NSO).