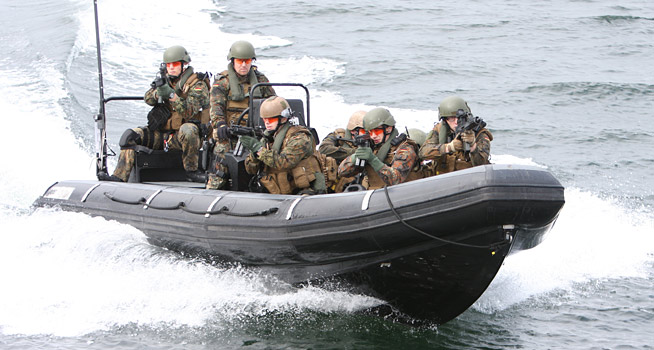 High speed boats, or fast attack crafts, are a serious threat in confined and shallow waters and pose a challenge to the naval military commander. Actual fast attack craft like pirate’s skiffs in the Gulf of Aden, Iranian regular naval forces in the Persian Gulf and Sea Tigers armed boats in Sri Lankan waters are examples of recent high speed boat operations. Criminals use go-fast type boats for drug smuggling in the Caribbean or human trafficking in southern Europe. NATO is facing anti-piracy operations more and more.

Demanding geo-factors in the confined and shallow waters theatre may affect picture compilation as well as sensor and weapon performance. In the confined and shallow waters theatre, situational awareness is one of the key elements for success. The information sources and sensors require effective data fusion for a validated recognized picture in order to give accurate information in the decision process of countering this asymmetric threat.
Today’s naval commanders need better understanding of high speed boats operations and tactics from all perspectives to cope with the growing threat. As soon as operations stretch towards the coastlines the risk of asymmetric attacks increases. Threat assessment is difficult as asymmetric warfare platforms or irregular war fighting, also known as Hybrid Threats, can merge and hide in the busy traffic and the operators will usually have superior local environment knowledge.
Technical, tactical and procedural solutions to the problem are a topic in the confined and shallow waters. Therefore the use of High Speed Boats for the Commander Task Group (CTG) / Task Force (CTF) Level is in COE CSW’s Program of Work as requested by the Royal Netherlands Navy and supported by the COE CSW’s Sponsoring Nations. The aimed project outcome will be guidance for the CTG / CTF and is planned to be delivered in the first half of 2013.

During the Northern Coast Exercises in the Baltic, the COE CSW has used the available forces to exercise and validate our ideas to High Speed Boat Operations since 2009. In this venue we cooperate with multinational forces, civil defense institutes and companies.

Our aim is to give a technical, tactical and procedural solutions