Combined Operations from the Sea Through the Littorals 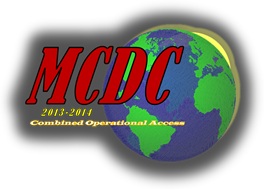 A reasonable campaign has been closed successfully.

The Multinational Capability Development Campaign (MCDC) is a follow-on initiative to the Multinational Experimentation Series. The Focus Area (FA) “Combined Operations from the Sea Through the Littorals” (COSTL) was one of seven areas in the MCDC series 2013/2014.

Referring to the Request for Support from Allied Command Transformation, the COE CSW acted over a period of nearly two years in the co-lead role of this project. The goal of COSTL was to develop a study for the operationalization of NATO’s Joint Sea-based Operations (NJSBO) concept. The overall aim was to facilitate the littoral theater of operation by delivering the full spectrum of land, air and maritime operational effects that may be supported from sea-based assets.

In distinction to comparable concepts, COSTL concentrated its effort on minimizing the footprint ashore and also considered aspects on the participation of nations currently not collaborating with NATO.

The comprehensive work has been successfully completed and the document was accepted by the MCDC Steering Group. In November 2014 the study was distributed to the costumers and the COSTL project was closed.