Autonomous Underwater Vehicles (AUV) are somewhat ambivalent in their nature; while reducing the risk to human life in Naval Mine-Countermeasure (NMCM) Operations, they may generate ethic concerns with regard to using them in other war fighting scenarios. For better or worse, the significance of unmanned systems for Naval Operations continues to expand and evolve rapidly.

For two years the COE CSW is working on a comprehensive study by analyzing the use of Autonomous Underwater Vehicles in NMCM Operations in order to provide orientation regarding the development of future AUV’s. The overall aim of this project is to contribute to improving the effectiveness of such systems in prospective NMCM operations.

On 22 and 23 November 2017, the COE CSW hosted the 4th and final AUV Workshop in Kiel. A dozen of Naval Mine Warfare experts with a deep knowledge of AUV discussed the flexible and modular use of unmanned underwater vehicles that are more and more shaping NMCM capabilities. The participants provided valuable feedback on the actual draft of the Study Paper on “The Employment of AUV in NMCM Operations” the COE CSW intends to release in 2018.

This final Workshop within the project was assessed a very success by the participants as the COE CSW provided once more perfect conditions for an open exchange of ideas and experience. 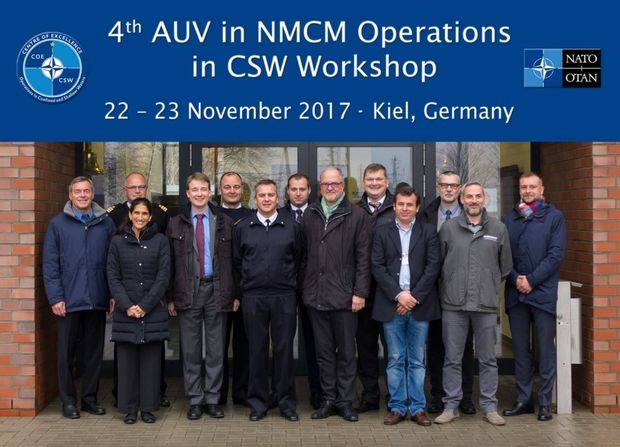