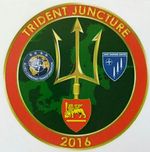 With the completion of scripting more than one thousand injects for about 90 different storylines the Exercise TRIDENT JUNCTURE 2016 (TRJE16) is well prepared for the execution phase now. TRJE16 will be the venue to train and certify the Joint Force Command Naples in leading the NATO Reaction Forces next year.

Although the overall scenario serves a land-centric operation under the terms of Article V (Collective Defence), numerous inputs have been created by naval Subject Matter Experts from several NATO Nations also for the maritime domain. Once more the COE CSW has contributed maritime expertise with emphasis on CSW in order to create a challenging environment for the Training Audience to demonstrating their skills in a computer assisted exercise scheduled for October/ November 2016.

In the further course the COE CSW will support the Maritime Response Cell as part of the TRJE16 Exercise Control, simulating a Maritime Force Command afloat and responding to the Maritime Component Command during the hot phase of the exercise.