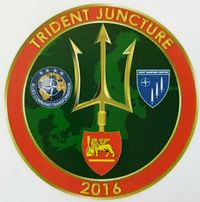 The Alliance conducts regularly realistic and challenging exercises in order to evaluate the NATO Response Forces including headquarters (HQ) of the NATO Command Structure.

Exercise TRIDENT JUNCTURE 2016 (TRJE16) was scheduled to primarily train and certify NATO Joint Force Command Naples. After having supported the development phase of this relevant exercise already earlier this year, the COE CSW also augmented the Exercise Control Team with one naval expert during the execution phase.

Although TRJE16 focused on a land-centric operation in Northern Europe, maritime aspects were also gamed in order to provide a 360 degree training of the joint operation decision making process. As a member of the exercise Maritime Response Cell, the expert of the COE CSW interacted with HQ STRIKFORNATO in its role of a Maritime Component Command by providing competent expertise in the full spectrum of maritime warfare especially on operations in Confined and Shallow Waters.