The Centre of Excellence for Operations in Confined and Shallow Waters (COE CSW) was delighted to be once again part of the “world's leading forum for debating the most pressing challenges to international security”. For the third consecutive year, the COE CSW contributed to the Munich Security Conference by organising the Maritime Security Roundtable as a side event, this year under the topic: “Bridging troubled waters – Alleviating conflict potential in the South China Sea”, and by supporting the Arctic Security Roundtable under the topic: “The Game is on: Great Power Dynamics in the Arctic”.

The COE CSW seeks to promote maritime understanding, and therefore encourages and supports discussions that highlight the particular challenges for the safe and secure use of the oceans.

From this point of view, current disputes related to the South China Sea region and to the challenges in the Arctic are excellent starting points to spark this kind of discussions. Thousands of miles apart, both maritime regions belong to the same strategic chess field. Current events in these regions influence the world order in the 21st century and shed light on great power competition and the position of medium sized and smaller states likewise. Emerging conflicts are multi-faceted and, beyond regional effects, of global importance.

For the first time since COE CSW has organised the Maritime Security Roundtables in 2018 and 2019, the COE CSW has had the opportunity to collaborate with the Center of China and Globalization (CCG).
The common goal was to elucidate from different perspectives and perceptions what has already been achieved in the South China Sea region to reduce the potential for conflict, what is still intended to be accomplished, and how all of these measures have been received so far and how they might be received in the future.

More than 40 participants, including two Ministers of Defense, members of different Parliaments, high ranking military personnel as well as representatives from various academic institutes and from the business world engaged in a lively discussion on how to alleviate the potential for conflict in the South China Sea. 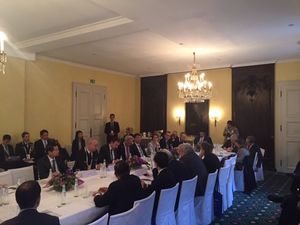 Although all participants again emphasized that UNCLOS is the legal regime that forms the basis to prevent or resolve conflicts at sea, fundamentally different and contradictory positions on the scope of application remain. These seemingly irreconcilable opposing positions have the potential to escalate, as behaviour and activities currently show. During the discussion, possibilities to alleviate this potential for conflict were addressed.

Again it became obvious that on all sides there is the fundamental willingness to avoid conflicts, despite prevalent diverging interests. Measures to improve mutual understanding and intensify dialogue have been initiated or are being pursued further. Successful implementation, however, requires the respective willingness and a continuous review of one's own position and, if necessary, an adjustment of one's own behaviour. The developments in the South China Sea remain important not only for the region. They will continue to be of global interest and importance. 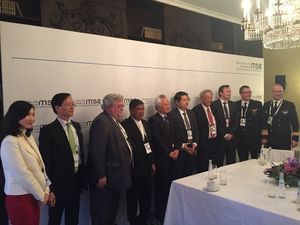 Since 2017 the COE CSW is involved in shaping the strategic discussion on Arctic issues together with the Munich Security Conference, the Wilson Center in Washington D.C., the Norwegian Institute of International Affairs (NUPI), the Arctic Circle, Iceland, the Stockholm International Peace Research Institute (SIPRI) and the Finnish Institute of International Affairs (FIIA). Together with the Who is Who in arctic affairs, this February the participants of the Arctic Security Roundtable focused on questions related to rivalry and competition, which challenge cooperation and Arctic exceptionalism. Besides the Ministers of Foreign Affairs from Norway and Denmark for the first time the Canadian Minister of Defence attended the Roundtable. Russia and China where both represented by high ranking diplomats, politicians and scientists. Around 60 participants from Politics, Military, Diplomacy and Science from all Arctic Nations engaged other nations´ important stakeholders, including representatives from EU and NATO. Ever since Mikhail Gorbachev’s Murmansk speech in 1987, where he defined the Arctic as a “zone of peace and cooperation”, the strategic environment has changed dramatically. In 2018, the Russian Minister of Defence Sergey Shoigu announced that competition in the Arctic could lead to potential conflict. Conflicting seabed claims between Arctic nations, competition over energy exploration, legal and illegal fishing activities and other issues are further causes for concern. Even day-to-day activities such as routine patrols or the exercise of Freedom of Navigation can result in misunderstandings which could escalate into tension. 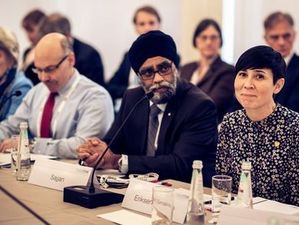 It is agreed that the Arctic cannot be viewed isolated from global security and international developments. Arctic exceptionalism, which treated the High North as an arena of depoliticized cooperation, is coming to an end.

The actual discussion was a true reflection on these issues. While the Arctic nations would like to continue cooperation, Russia’s military build-up and China`s enhanced involvement are causing growing tensions. Trust is a valuable currency in international relations. Therefore, it remains important to keep up the thrive for mutual understanding and the spirit of continuing cooperation on a daily basis in future.

The Arctic states made crystal clear that decisions in the Arctic can only be made by Arctic nations; all others are welcome to cooperate but won’t get a say, regardless of claims of being Near Arctic States, important or powerful.

While potential conflicts could increase, the Arctic Nations do not have a political body to address and solve them. The question of how to deal with that potential will be amongst the most urgent to be answered in the near future.